‘The most beautiful girl in the world’: Angelic five-year-old from Nigeria sends social media into a frenzy after photographer shares her portraits on Instagram

A five-year-old girl has been dubbed the ‘most beautiful in the world’ after a photographer shared snaps of her on their Instagram account.

Jare, from Nigeria, was photographed by Mofe Bamuyiwa who shared three stunning portraits of the girl on her Instagram account last week.

The images see the child posing in a simple setting showcasing her enormous eyes and perfectly smooth skin as well as her impressive head of hair.

‘I could have made her smile and make her laugh out loud but I put her in their natural moments for us to see through their eyes !’

Fans have been quick to praise Mofe’s portraits of the child with the first of the three images amassing 16,000 likes.

Commenting on the photo user serenaqueen22 wrote: ‘The most beautiful girl in the world.’

User igeyj added: ‘This is what you call the most beautiful girl in the world. Wow.’

Agreeing another added: This beautiful child has Broken the internet’.

The initial portrait received more than 16,000 likes from Mofe’s followers who described Jare as a ‘beautiful angel’

The second two portraits also received plenty of praise from followers who were ‘enchanted’ by the child’s looks.

Mofe surprised some of her followers while describing her process behind the photograph admitting she wanted the child to look ‘more adult’.

Captioning the first portrait she said: ‘The opportunity came and I had to take a bold step to express my ideas of how I want to take portraits of kids.

‘I want to portray the interception between her childhood and adulthood so both stay timeless!

She adds: ‘Posing them as adults ! Was my trick to create it a timeless portrait!’ 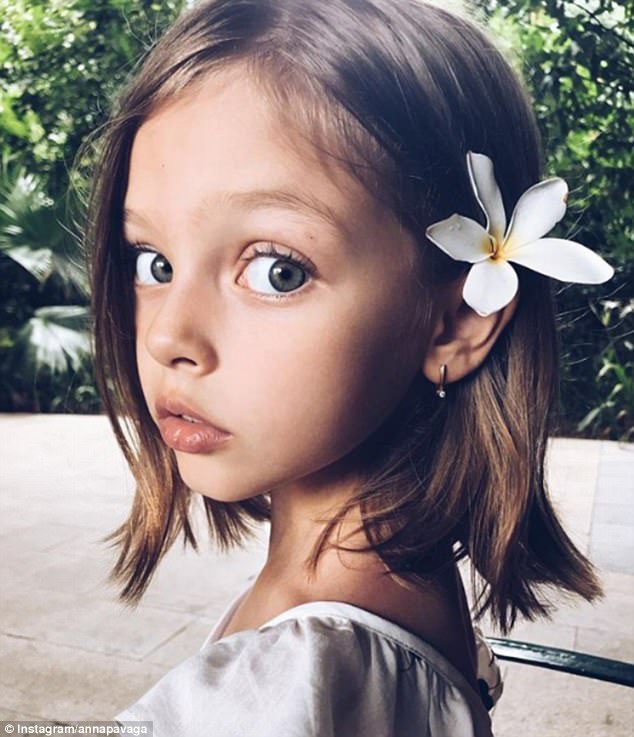 She follows in the footsteps of Anna Pavaga, 8, who was hailed as the world’s most beautiful girl in December 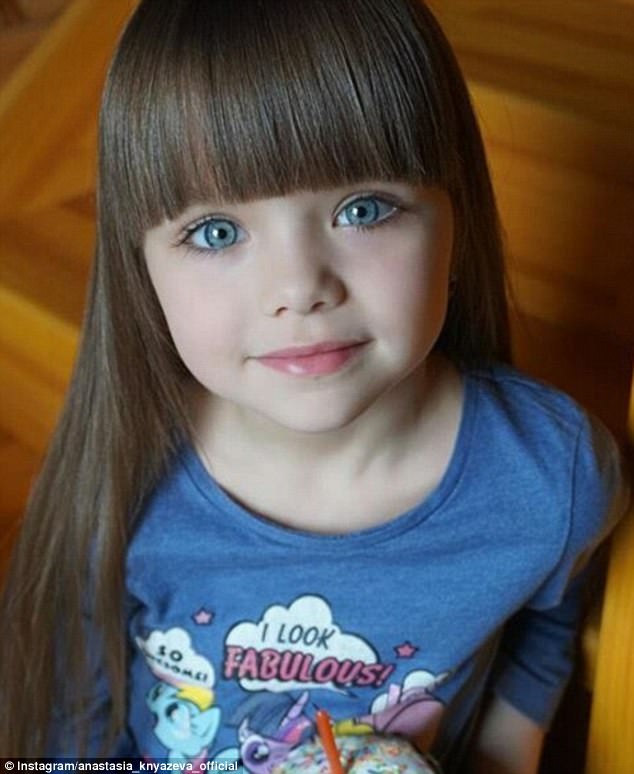 Fellow Russian model Anastasia Knyazeva, six, has also been dubbed ‘the most beautiful girl in the wold’ on Instagram

Little is known about Jare but Mofe has revealed that she is not a professional model.

The five-year-old lives with her two sisters – Jomi, 7, and Joba, 10, who also pose on their own Instagram account The J3 Sisters.

Mofe told Yahoo Lifestyle that she inspired the children’s mother to launch the Instagram page, where they already have more than 5,000 followers.

Jare follows on from other youngsters whose appearances on social media saw them earn the title of the most beuatiful girl in the world.

In December Anna Pavaga, 8, was hailed as the world’s most beautiful girl after a successful modelling career starting at the age of three.

She appeared in fashion campaigns for dozens of campaigns all over the world, including in China , as well as the glossy pages of Vogue Enfants, a supplement of French Vogue.

And earlier the same month six-year-old Anastasia Knyazeva, also from Russia, hit the headlines earlier this month, after being hailed ‘the most beautiful girl in the world’.

Thylane Blondeau: French girl who was dubbed the ‘most beautiful in the world’ aged six

French model Thylane Blondeau, who is now 16, was famously called the most beautiful girl in the world after appearing on the cover of Vogue Enfants at the age of six.

The youngster, who is the daughter of footballer Patrick Blondeau and presenter Véronika Loubry, had begun modelling at the age of just four, appearing on the catwalk for designer Jean Paul Gaultier.

In 2011, at the age of 10,  she became the youngest ever model to star in Vogue Paris in a shoot that proved to be controversial.